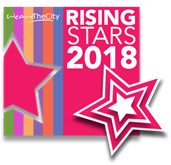 London, 18 July 2018: Today, WeAreTheCity released the names of its top 100 female Rising Stars, as part of its annual awards programme, to celebrate the female talent pipeline across the UK.

The prestigious Rising Star awards, now in their fourth year, aim to showcase the sheer volume of female talent that exists across our industries and to create role models for the future.

The awards focus on celebrating the achievements of women under a management level regardless of age. Over the past four years, WeAreTheCity has built up an alumni of 400 award’s winners through its Rising Star Awards in the UK and India and through its TechWomen50 Award.

Over 78 of the award’s alumni have since been promoted by their organisations as well as going on to win additional awards.

This year’s winners include the British Army’s Ice Maidens, who became the first women to cross Antarctica; Krystal Archer, SuperFoxx, who was one of the first female DJ’s for the Ministry of Sound; and Sophie Ainsworth, Founder of RAiISE (Raising Awareness of Invisible Illnesses in Schools and Education); as well as a number of other inspiring women who continue to push their boundaries in order to achieve their full potential.

The awards also celebrate outstanding organisations in the Company of the Year category. The award, sponsored by CMI Women, recognises the achievements of a company who can clearly demonstrate that it is actively supporting its female talent pipeline through its initiatives, training, development programmes, internal employee relations and diversity network groups. This year’s Company of the Year winner is Barclays.

During the month of May, over 35,000 public votes from 110 countries were received for the 200 shortlisted nominees.

Vanessa Valley OBE, Managing Director of WeAreTheCity, said, “It has been a total honour to run this year’s awards and highlight the achievements of so many amazing women. We are exceptionally proud that year on year our Rising Star community continues to grow and most importantly that we continue to uncover and showcase emerging leaders and role models from across the UK. Not only do these awards shine a spotlight on the female talent pipeline, but they should also be seen as a call to action for all organistions to continue to invest in their female talent pool. Myself, my team, our sponsors, judges and supporters are very much looking forward to celebrating with all of our winners at the NewsUK on 12 July”.

The top five winners for each category will be celebrated at a prestigious awards ceremony on 12 July at NewsUK’s headquarters in London.

The winners of each category can be found in alphabetical order below. Full details of each of the winners can also be found by visiting risingstars.wearethecity.com

Rising Stars in Defence – Sponsored by The Royal Navy

Rising Stars Company of the Year – Sponsored by Bloomberg

WeAreTheCity.com is a female development organisation that helps companies to attract, return and develop their female talent pool. WeAreTheCity provides resources for women looking to develop themselves personally and professionally.

For information about working with us, please visit: workwithus.wearethecity.com