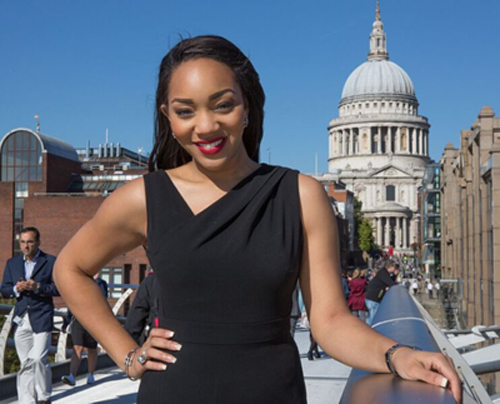 Bianca Miller -Cole is an award-winning Entrepreneur, having started The Be Group in 2012 with the belief that all individuals should be able to access personal development services. Bianca has developed her company into the ‘go to’ business for personal branding success. The business has an impressive list of clients including HSBC, Accenture, AMEX, Olswang LLP, Google, BT, EY, LSE and Kings College London to name a few.

Bianca became known as a public face after an excellent performance on BBC business competition, The Apprentice in 2014. Where 10 million people watched her on a weekly basis for 12 weeks as she battled for the coveted prize of £250,000 and a business partnership with Lord Sugar. Bianca battled in the final, becoming runner up but that has not stopped her progress and her idea for a diverse range of nude hosiery which became a reality when ‘Bianca Miller London’ launched online in November 2015, launched with Global Fashion Destination ‘Topshop’ in September 2016, QVC and the Morleys Group in 2017.

In January 2016 Bianca was awarded a prestigious ‘Power Profile’ from Linked In as one of the top 10 most powerful leaders on the website, she was chosen from 20 million members in the UK and is joined in this list by household names like Richard Branson, James Caan and David Cameron. Bianca has been listed on numerous lists for the top entrepreneurs in the UK and continues to be nominated and win awards for the work she does.

Bianca uses her knowledge and experience to assist budding entrepreneurs in making their dream a reality via various campaigns including working with Microsoft, EY, Evolve Housing and .UK (Nominet). Most recently Bianca co-authored a book with her husband and fellow established serial entrepreneur Byron Cole. The book ‘Self-Made: The Definitive Guide to Startup Business Success’ published by Hachette Group in October 2017; created to inspire, guide and assist budding entrepreneurs by taking them step by step through the process. She has since developed a mentoring programme which see’s her and co author / husband Byron Cole mentor over 200 entrepreneurs.

In 2019, Bianca appeared as the expert business advisor in Channel 4 show ‘Save Well, Spend Better’ in a 6-part series to help members of the public with their financial dilemmas. Bianca’s second book ‘The Business Survival Kit’ is due out in September 2021 with Penguin Random House chronicling tips to help every busy professional and entrepreneur not only survive but thrive in business; covering topics like imposter syndrome, anxiety, goal setting, romantic relationships, financials, stakeholder management, stress etc.

Bianca has become extremely popular for her keynote and guest speaking appearances due to her ability to engage, excite and inspire any audience with any topic. To date popular topics have included: Her inspirational journey, making dreams a reality, overcoming issues of diversity, being a woman in business and just generally how to motivate yourself to get ahead.